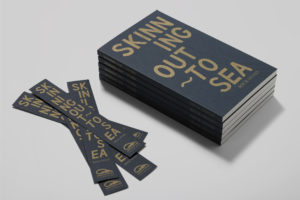 In the 1960s, when Hoxton-born Mick Hugo ‘skinned out’ to sea he was joining more than 150,000 other British merchant seamen then serving on ships across the world. The Merchant Navy provided a safety valve for a lot of young working class men, enabling them to tear up their past and start again. Yet we have very little idea of what life was like, ‘cabined, cribbed, confined’ at sea for long periods of time amongst strangers, who became by default, in Hugo’s words, ‘your adopted family’.

‘Skinning Out’ provides a rare and affectionate account of life above and below decks, as well as bouts of shore leave mayhem, all described by the writer’s own captivating illustrations.